Hi there! Are you one of those who have always wanted to play the piano? If so, you have the chance to get started right now. This article is called “How to play the piano for beginners” and if you follow my guides, I can help you become a better beginner, and I guarantee that before you finish, you will be able to play a few songs on the piano.

There are lots of great training programs teaching how to play the piano for beginners, but I know from experience that it can be difficult to learn something new, especially at the beginning. I intend to get you started without having to learn too much about music theory and notes, and if I succeed, I hope it will make you want to learn even more. I also want my teaching to be such a positive experience that you may come back another time.

I want to break down the content into topics and explain as much as possible with the help of visuals. First, we take a look at the keys, what they are called and how they are organized. Then you learn how to place your hands and fingers correctly on the keys. In the end, you are going to play along with some of my tutorial videos.

If you want to learn more than I will teach you in this article, I recommend joining Pianoforall which is one of the most popular and respected piano courses on the web.

A full-size piano has 88 white and black keys, most of which are white. The black keys are placed in groups of two and three, forming a pattern that makes it easy to navigate to the tones to be played. Normally pianos have weighted keys, that is, the keys give a little resistance when you press them. The resistance is caused by hammers who will hit the strings inside the piano when you press the keys. This unique hammer system makes it possible to play the piano both powerful and soft. The white keys are named after the first seven letters of the alphabet, A – B – C – D – E – F – G, but the music alphabet begins with the letter C. The most important C to find at first is the middle C. It is located at the left of two black keys and usually right in front of you when sitting at the piano.

When learning to play the piano, it is important to know how to place hands and fingers. Look at the illustrations and try to do the same. The fingers are numbered from 1 to 5 where the thumb is finger No. 1, the same for both right and left hand.

First, find the middle C and place the right hand finger No. 1 on it. Follow with the rest of your fingers on D – E – F – G. Then let the left hand finger number 5 find the low C key that is seven tones to the left of the middle C. Look at the drawing if in doubt. 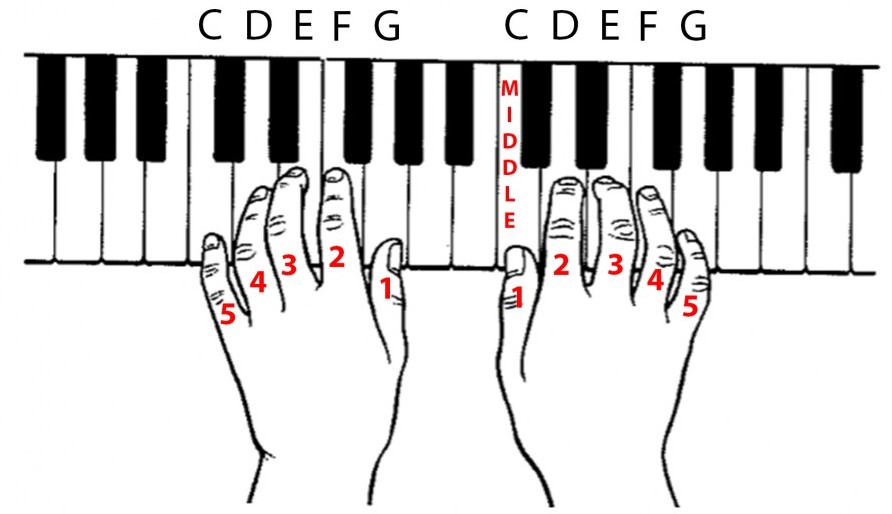 We have come to the exciting part of the training. In this section, you and I will play the piano together in tutorial videos that will teach you to play the piano in a simple and fun way. To make it easy to keep track of what is happening on the screen, keys and fingers appear very intuitively throughout the songs. Just remember to hold your hands in the right position and keep your fingers on the keys all the time, also the fingers you don’t use. Do not worry if it’s a bit buzzing the first time you try, you can play the song from start as many times as you wish.

The first play-along tutorial is From The New World by Czech composer Antonin Dvorak. As a start-up, it is quite easy to play. Place both your hands on the keyboard like shown in the illustration above and be ready to start playing. You will soon notice that the right-hand tones appear in green color and the left-hand tones in blue. Finger numbers will appear on most of the tones and it’s very important to follow these numbers all the way. If it’s difficult playing both hands at the same time, just take one hand at a time.

Ready? Here we go! Just click the video below!

The second song is Alouette, a popular French-Canadian children’s song. This is an easy one too, but there will be two and three-finger chords in the left hand several places in the song, meaning your left hand has to play several fingers at the same time. It can be smart to practice left hand a couple of times first and then play using both.

The next one is Lightly Row, another popular children’s song. The challenge in this song is to move your left hand away from its usual position. At one point in the song, you will play the tones A – B that are higher up than you previously played. You will notice when this occurs and my best tip is to follow all finger numbers and play as noted. Let’s try it now!

The last song is Spring from Vivaldi’s Four Seasons. This is also easy to play even if it has a couple of challenges you have to cope with. You have to change the right-hand position a couple of times in the middle of the song, and the notes will go a little faster than you previously played. Just follow the finger numbers and you’ll get it right.

I hope you have benefited from following me through the different sections. I have tried to convey the content as understandable as possible, and I especially hope that the videos have been helpful. If my instructions and knowledge have inspired you to find out more about how to play the piano for beginners, I’m very pleased. If you’ve learned something too and also have had a lot of fun, my job is done.

Thank you for joining this walkthrough, and please feel free to ask questions or leave comments!